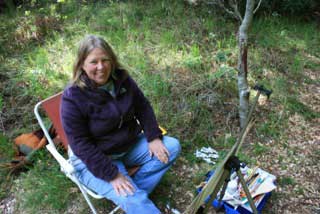 Born in Marin County, CA, Lynn is a 5th generation Californian. She spent her early years In Marin before her mother accepted a teaching position in the Watts area of Los Angeles and they eventually moved to Manhattan Beach. It was here that her mother met Joe Swan, a pilot for Western Airlines. They were married in 1967. That same year they purchased 13 acres in western Sonoma County which would become Joseph Swan Vineyards. Later that year the family moved to the new ranch. As a 13 year old "city" girl Lynn immediately fell in love with her new home. She spent countless hours riding her horse bareback through the local apple orchards and the Laguna de Santa Rosa. As a result of her mother's views on alternative education she was enrolled in a "free" school known as Farm Home School It was this school that instilled a life long appreciation for all things artistic. During these early years she was often pressed into duty helping Joe with everything from foot stomping to labeling finished wine. As she grew older she was exposed to many great wines shared at the table with Joe, her mother June and the ever-changing cast of characters, some world famous, that came to visit.

Lynn Her first "real" job was working for a local company called Lasercraft. Here she perfected the art of laser engraving of paper. She also attended Santa Rosa Junior College and earned an AA degree and a certificate in graphic arts. She also pursued an interest in dance and performed in several public performances. It was during this period that she met a young man that came to the house frequently to see Joe and talk wine. She was unimpressed. However, a chance encounter some years later with the no longer exactly young but still shy man led her to ask him to accompany her to a dance performance. They were married the following year (1986). Upon Joe Swan's death in 1989 they formally took over the operation of the vineyard and winery. Lynn continues to play a major role in the day-to-day operations of the winery. In addition to keeping the books she does the wineries graphics, ensures that the newsletter gets out (usually by using her keen powers of persuasion to get Rod to write it) and greets new customers and old friends alike.

When not occupied by the winery she works in her art studio (a selection of her encaustic paintings are on display in the winery), rides her horse (not the same one she had as a kid), dances, kayaks and generally tries to enjoy all that this beautiful area has to offer.